Speed Dating In NYC: What It’s Really Like & What I Learned 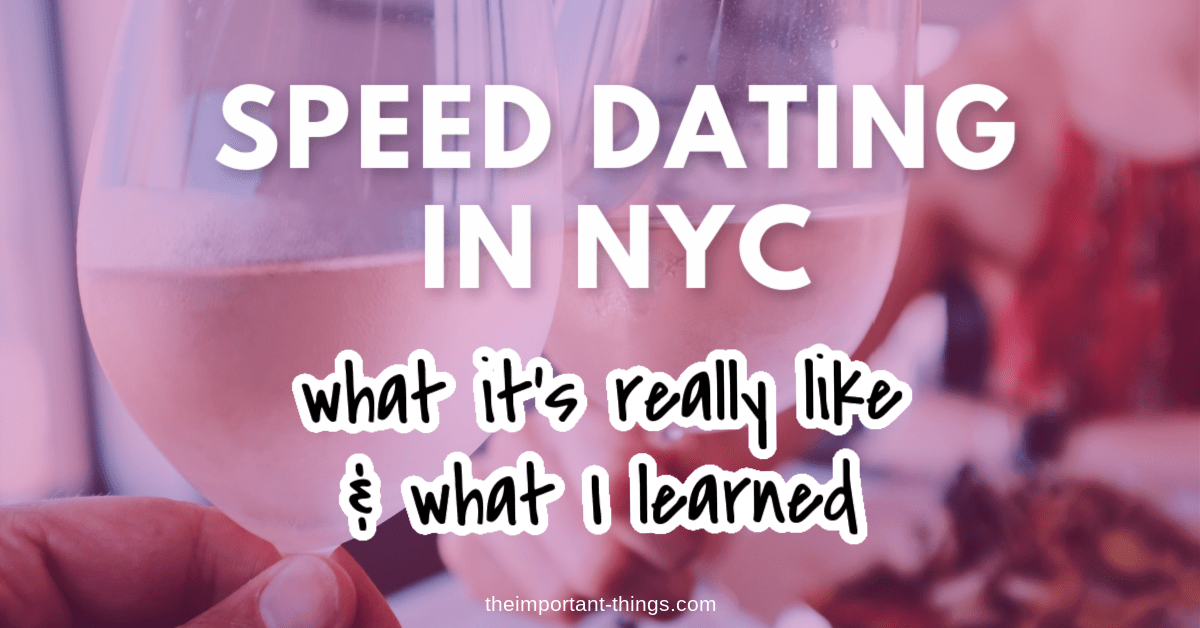 I know you’ve all missed my dating posts, and you better strap in, because this one is a doozy. That’s right, Kari went speed dating…and she’s got stories.

I honestly never ever thought I would do anything like speed dating, but when an ad for this speed dating event in NYC came up on my Instagram, I was intrigued. The more I thought about it, the more I thought, “you know what, if these guys are literally paying for a ticket to an event, they’re probably looking for something serious, right?” It began making more and more sense in my head, and after another couple of months of dating app DUDS, I figured… screw it. Why not?

Of course, I had to recruit a few friends to come with me so that I wouldn’t have a nervous breakdown doing it on my own. It DEF made it more comfortable having familiar faces there, as it can be a super awkward, intense experience right at the beginning. Plus, it’s always fun to have a little recap with friends after a date (or 15 dates), right?

Anyway, let’s dive into the dirty deets of my speed dating experience.

In classic Kari fashion, I did just a little bit of “research” about this speed dating event before, and I definitely recommend doing this if you are considering attending an event. There are a lot of factors that can make or break the experience, and it’s much less nerve-racking to know exactly what you’re walking into (which I’ll go into detail about later on): location, age range, price, date format & timing, drink/food options, date selection process.

Here is the description of the event that I attended:

A low key, sophisticated approach to dating in New York City. Preferring a ‘less is more’ environment devoid of typical event trappings. Gone are the name-tags, shouting and over-the-top party trimmings. Meeting your special someone shouldn’t be anything but a comfortable and relaxed experience. After being shown to your table, the ladies will remain seated for the duration of the event. The gents move from lovely lady to lovely lady every six to seven minutes. Simply jot down your potential [matches] at the bottom of your Scorecard and we’ll take care of the rest. For those who garner matches, you will be notified via e-mail within 24 hours of the event ending of your [match] results.

Other than doing research, there’s not a lot of other preparation necessary. Prepping conversation starters likely won’t help, as every conversation is different and just happens naturally. Other than that, all I can suggest is wearing something conservative but flattering, and something that makes you feel like your best self! And–show up with a good attitude and an open mind!

I highly suggest arriving to speed dating about 10-15 minutes early to get your bearings. Not only can you likely select your own seat, but you have time to grab a drink at the bar and get the lay of the land (and check out the other daters as they arrive). Plus, it gives you time to chat up the host and ask any questions you might have.

The reason I suggested checking out the location before you sign up for speed dating is because the one that I experienced wasn’t the best. Not only was it the exact same location as my date with Fake Fred (yes, I had traumatic flashbacks almost right away), but it was a little too swanky for my taste. It was SO dark and really hard to see the menu, the people, and your scorecard (who knows, maybe I’m just old). Also, the seating was very awkward. It was a small place and all the tables and seats were VERY close together, so you not only didn’t really have any privacy, but you end up having someone you already spoke to sit down right next to you, which is just kind of weird. Plus, sitting on a small, cushy loveseat with a stranger is kind of awk, as well.

One other thing about the location that I want to mention is that they didn’t rent out the entire place or section. There were 3 or 4 people at the bar that weren’t a part of the event, which was super weird. I almost feel like they do it pretty often to eavesdrop for fun, because that’s exactly what they did (sat there silently and watched). However, this ended up being a pretty hilarious situation…there was an older woman sitting next to me listening to all my conversations and giving me her feedback on each guy I spoke to. It was weird at first, but by the end, it was kind of fun to bounce reactions off of someone else. Plus, her comments were freaking hilarious. Examples include: “fuc*ing creeper” “he’d be good in bed” and “if you don’t date him, I will.”

Alright, let’s talk about the actual dates. Each date was 7 minutes long, which (after doing some research) I found was on the longer side when it comes to speed dating. There were a few times that 7 minutes felt like forever, but I can’t imagine being able to get into any kind of meaningful conversation in less than 7 minutes. So, in my opinion, this timing was good. While there were times that I was insanely relieved that the 7 minutes were up, a few times I found myself bummed out that the conversation had to end.

As far as conversations go, I talked about everything from the weather (actually), shoes (duh), and college (lol), to seasonal allergies (fml). As I mentioned before, going into speed dating with topics in mind doesn’t seem worth it to me, as the conversation basically just happened as it was going to happen.

I will admit, I come from the age of online dating (dating sites, dating apps, even Facebook dating), and not knowing the person’s “stats” (age, where they’re from, etc.) was both good and bad. It definitely lets you get to know each person without pre-judging them in any way, but for those who have “deal-breakers” like age, religion, children, etc. I can imagine this makes it a bit harder.

Once the dates have all rotated through and the event is over, you’re asked to fill out a “scorecard” of which dates you would like to see again. We were allowed a maximum of 5 names, and if those dates also wrote you down, they contact you the next day with their email addresses.

Here are a few things I recommend keeping in mind:

About 24 hours after the speed dating event, I got an email from the organizer with the names of my “matches.” This means that I wrote down their name as a potential date, and they wrote mine as well. They send email addresses, which I personally liked. It made it a bit more formal than a “hey what up” text message.

As I said earlier, only write down the names of people you’ll actually go on another date with. I ended up not really wanting to go out with a couple guys, and felt like a total asshole for getting their hopes up. But I guess you live and learn.

While I didn’t make a love connection during this speed dating event, it was so much fun to meet new people I probably never would have met otherwise. One of the guys I wrote down on my list was more of a friend connection, and we actually ended up hanging out as a big group later that week! So in all, it was a pretty cool experience that I would definitely do again.

To wrap up, I’ll reiterate my biggest piece of advice for speed dating: write down names and identifying factors (can be physical, or what you talked about) AS SOON AS POSSIBLE, or you’ll forget in two seconds and the whole thing will be all for naught.

This speed dating experience opened my eyes to alternative methods of dating (many of us can agree that dating apps suck, no?) and I can’t wait to keep exploring more! Stay tuned 😉