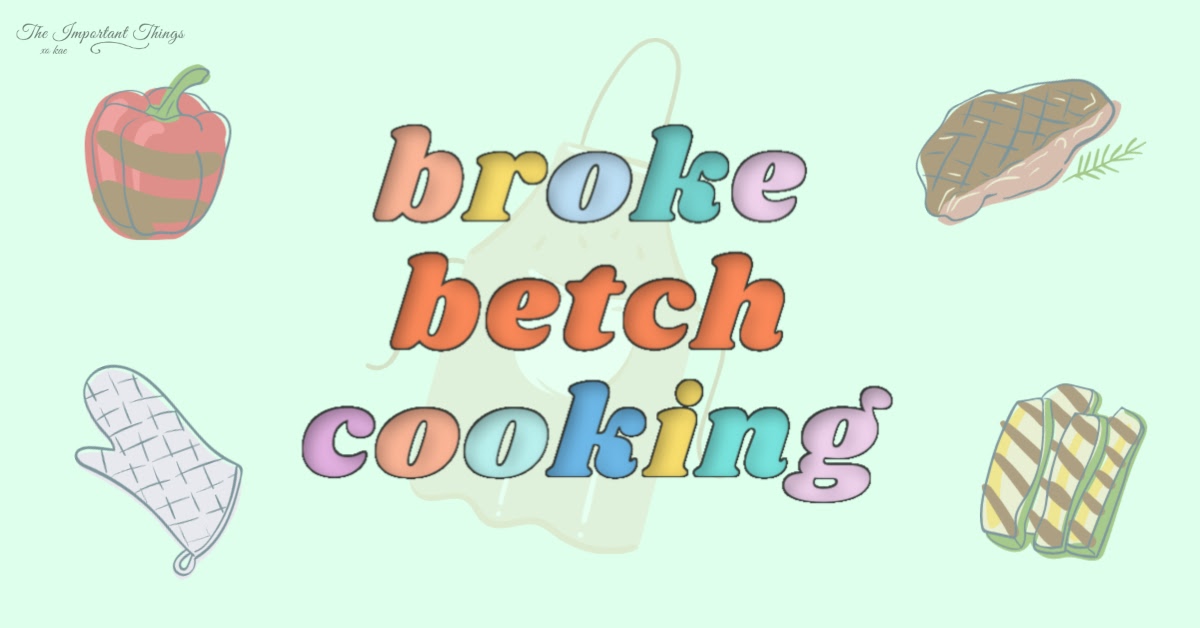 Welcome to my Broke Betch Cooking series, which is exactly what it sounds like: cooking deliciousness on a budget! Living in NYC is expensive, as is ordering takeout for lunch and dinner every day. Other than Sushi Sundays, which is a long, beloved tradition for me, I try to cook most of my meals at home. Sometimes I’ll go to the grocery store with something specific in mind, but a lot of the time, I end up making something with whatever I can find in the fridge/pantry (I am the leftovers queen). I am a HUGE foodie, and strongly believe that a delicious meal is worth all the time and effort. I’m continuously surprised by how often people will reach out about the pictures of food that I post on Instagram (yes, I am that basic bitch), so I figured I would share my “recipes,” if you will, to spread the wealth! Enjoy!

Growing up, my brother and I always got SO excited for Taco Tuesday. In my head, I always simply assumed that this was one of those complicated recipes that my mom just somehow knew how to do. Then, one day, I grew up and realized that taco seasoning existed.

It’s literally as simple as dumping the taco seasoning on whatever meat you’re using. Normally, I would use ground beef because it’s so, so yummy. This time, I decided to go with a healthier option and do chicken tacos/burritos! As I said in a previous post, I’ll often go to the grocery store with a type of food in mind as a theme for the week. When I’m shopping for my Mexican food ingredients, I’ll also get some chips so I can make nachos, or eat the chips with the salsa or homemade guacamole, as well. Then, from there, you can also put guac on pretty much everything.

Anyway, here are your ingredients:

Cooking the chicken is super simple, and it doesn’t take a lot of time or effort at all. I chop up the chicken breast into cubes (around 1 in.) and toss them with some olive oil in a sauté pan. After they have begun cooking a little bit (5-7 minutes) I’ll throw in the diced up peppers and onions (I’m a lazybones and usually get these pre-cut at the store) along with the taco seasoning (I only used half a packet for 2 chicken breasts). While the chicken finishes cooking I sprinkle some of the Mexican blend shredded cheese onto a tortilla and pop it in the oven for a minute or 2. If you leave it in the oven any longer, the tortilla will start to crisp up, which you don’t want if you’re making a burrito or soft taco. After the cheese has melted and the tortilla is warm, I’ll slice up my avocado.

Next, I’ll cut into a piece of chicken (check a bigger one just to be safe) to be sure that it’s cooked through, and I check that my onions are starting to look translucent (this means they’re cooked). I then put a good amount of the chicken/peppers/onions mix on top of the melted cheese on the tortilla. I top this with Pico de Gallo (I buy this fresh at the grocery store, or you can use salsa), sour cream, avocado, and hot sauce. Roll this up in your tortilla and you’re done! (TBH, rolling the burrito is probably the hardest part of this all. I’m weirdly proud of my burrito rolling skills.)

The best part of this “recipe” is that you can put your leftover chicken into the fridge and simply heat it up and top with the fresh toppings. Two chicken breasts lasted 3 or 4 meals for me! Nom nom nom.

Guide To The 10 Best Hair Brushes For Every Hair Type