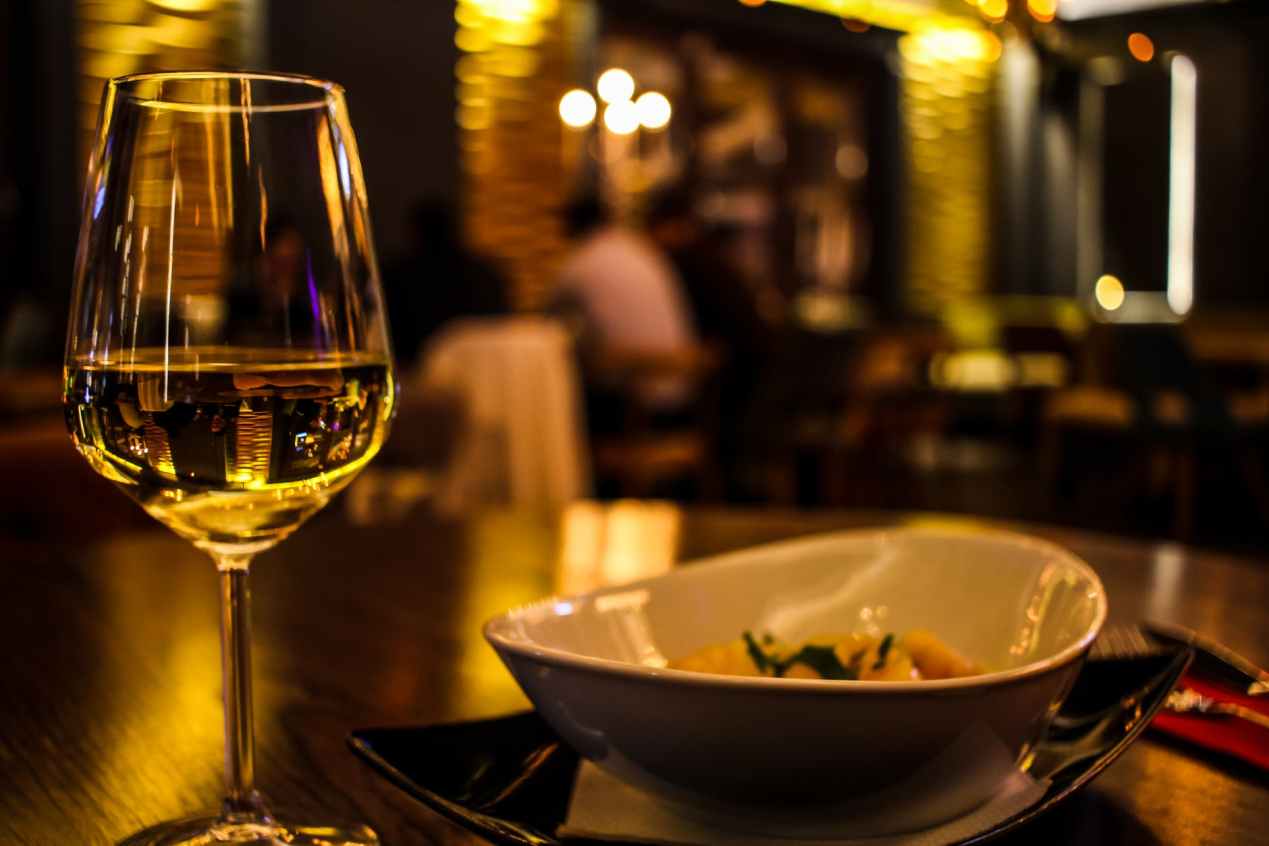 This is one of the more horrifying dating stories I have to tell, and the worst part is that I’m not sure if it was my fault, his fault, or neither of our faults…

I met this guy, we’ll call him Fred, on yet another dating app (are we noticing a pattern here?) and after talking for a few days, he asked if I wanted to meet at some fancy champagne bar. It seemed a little swanky for a first date, but I wasn’t going to complain. Didn’t know much about the guy, but he seemed nice and harmless. (*Jaws theme music starts playing*)

So, I show up to the champagne bar, naturally 30 mins early, and sipped a glass of (the cheapest) champagne while I waited. We had agreed to meet at 3pm, so once it reached 3:15, I got a little impatient and texted Fred asking if he was on his way. He replied, “I’m here. I’ve been here for a while.” The champagne bar was alarmingly dark for mid-afternoon, so I took a quick look around to be sure he wasn’t lurking in a corner somewhere, or if there was another room I had missed or something. Nope.

Confused, I stepped outside to call Fred and tell him that I was there waiting, and couldn’t find him (side note: there were literally only 2 other people in the entire place). He then chose to tell me that the champagne bar he had mentioned to me was a chain- with 3 other locations in the city…how the hell was I supposed to know that? Anyway, he said he was at the location about 20 blocks away. I was super relieved when he offered to walk to the location where I was, as I was wearing massive heels and just wanted to go home at this point. Trying to keep the mood light and happy, I asked if he wanted me to order him a drink since I had already had one, and he said yes.

A little frustrated, I ordered another glass of champagne and the repulsive citrus vodka drink that Fred had wanted. 20 minutes pass, and I was getting more and more annoyed every time the door opened and it wasn’t him. If you’ve ever been on a dating app date or a blind date, you know the door-opening anxiety I’m talking about.

Fiiiiinally, a guy walks in and makes eye contact with me and smiles. I smile back and wave, assuming it was Fred. As he came closer, I started to realize that he didn’t really look like his picture did on the app. I gave him the benefit of the doubt for about a minute or so (maybe the picture was old, maybe he gained weight, who the hell knows), but still couldn’t shake the feeling that this didn’t seem like the same guy. When he seemed surprised that I had already ordered him a drink, I knew it wasn’t Fred, just someone who looked vaguely like him in that weirdly dark bar.

It was almost painful to do, but I said awkwardly, “I’m actually meeting someone here for a date, I think you may have the wrong person.” He laughed and INSISTED that he was my date. In my confusion and shock, I couldn’t think of the guy’s name that I was supposed to meet (Fred), so I couldn’t even ask him his name to prove him wrong. When I told him again that I was meeting someone else, he kept saying, “No, I was supposed to meet you here, I’m your date, I recognize you.” I was so shook, but kept trying to reason with this rando claiming to be my date.

Meanwhile, who comes through the door but the real Fred, himself. Fred makes direct eye contact with me and quickly sits down at a seat at the other end of the bar. I was confused as to why he did this but had to sort this madness out. I told fake Fred to hold on one moment and walked over to real Fred. I told him that there was some confusion and that the guy I was speaking to thinks he is there to meet me for a date for some reason. I nicely asked real Fred to back me up to fake Fred.

To my absolute horror, real Fred says, “I’m sorry, I don’t know you. I don’t know what you’re talking about.” I literally looked around, expecting some guys with cameras to jump out and tell me I was being punked. For a moment, I even doubted myself that maybe I had gone insane and forgotten what his photos looked like, and fake Fred was actually real Fred. I thought I was going to puke. I asked him one more time and told him my name, but he again said he didn’t know me.

I didn’t know what else to do, so I went back to my seat next to fake Fred. He then asked me, “Wait, so you’re not Birdy?” I told him that, hell no, my name is not Birdy, you have the wrong person. FINALLY, fake Fred leaves me alone (real Birdy arrived shortly thereafter… good for you, Fake Fred), and I notice that real Fred gets up and walks out. I am so shook, I have absolutely no idea what just happened.

I did the only thing I could think of- I went to the bathroom, called my best friend Kelsey, and cried– what else is new? While I’m on the phone with her, I get a text from… you guessed it… REAL FRED. The text read, “Sorry, I’m not really into girls who roam around bars flirting with every guy they see. Not my cup of tea.”

Just let that sink in a little bit.

This psychopath literally pretended not to know me after we had both been waiting on this date for almost an hour AND he claimed that I was “roaming around” the bar talking to dudes. This was one of the more embarrassing, awkward moments of my life, and as you can imagine, I let Fred have it (via text message) about making assumptions about women and for wasting my time, and promptly blocked him. I most likely overreacted, but again, what else is new?

So there you have it, yet another dating nightmare, and another NYC psycho that I will never speak to again. On the bright side, after I came out of the bathroom, the bartender (having witnessed the entire thing…fml) comped my drinks for me and told me that there are bigger, BETTER fish out there. We shall see, Mr. Bartender. We shall see.

How To Dye Your Hair At Home – Complete Tips & Guide